After a long week of hard work, about ten Chinese Christians in Guangzhou, a big city in the South of China, gathered in a house church. They had just started reading the Bible and enjoying a short moment of peace and fellowship. “Bang, bang, bang…” Their worship was interrupted by heavy pounding on the door.

The police raided the small apartment used for the congregation of a Bible church. The pastor and participant Christians were arrested and detained in the local police station from hours to days. The authorities accused these house church Christians of spreading lies and deceiving people. Often, Christians must sign a statement to disavow their faith before being released. Friday evening Christian services in an ordinary house are banned in China. 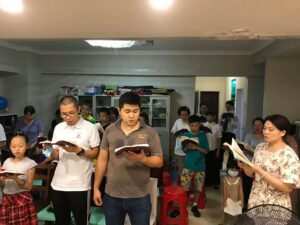 Recently, in Xiamen, about 40 Christians and their families risked their lives congregating at a beach to avoid persecution by the local authorities. Moving their house church to the beach did not save them from persecution. During their gathering, the police came and forced them to disband. The local government official in charge of religious affairs arrived, and took videos and photos of every participant. The Christians were accused of unlawful assembly. 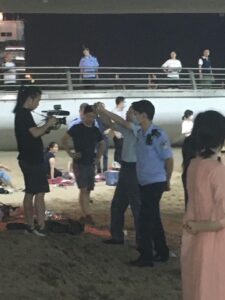 Xiamen is a beautiful city on the southeastern coast of China. The recorded activities of Western missionaries in Xiamen can be traced to as early as the end of the Ming Dynasty (around the year 1644). If it were not controlled by the Communist Party, the city would be filled with Christians and prosper in Christian culture, such as beautiful churches. Today, many churches have been demolished. other church buildings have been lucky to survive temporarily, the most important Christian symbol – the cross – on the roofs of their churches have been either burned or permanently removed.

Thanks to social media, I’ve seen videos and photos of those Chinese Christians that were persecuted during one week in August. However, Christians in China are persecuted every day – the government asks children to report if their parents read them the Bible or take them to a Christian gathering; church services must replace the portrait of Jesus with a photo of Chairman Xi; secretly gathering for fellowship may lead to jail.

Every Sunday, when I attend church services, I think of my fellow Christians in China. To me, going to church and worshiping God freely is a great privilege. I thank God for guiding me out of China; I am grateful that the United States of America allows me to stay in this great country and have this privilege, the right to freely exercise my religion.

The goal of the Chinese Communist Party is to eradicate Christianity and other religions in China. The world is witnessing the persecution of Uyghurs. Their mosques have been either demolished or destroyed and their religious symbols taken away. Children are forcedly separated from their parents for brainwashing. Many Uyghurs have been tortured in reeducation camps.

“Standing up to tyranny is not easy,” said Mr. Chen Guangcheng at the recent Republican National Convention. Mr. Chen, a blind, Chinese lawyer, was persecuted for speaking out against forced abortion in China. “If we do not speak out, we are accomplices,” said Mónica González Mújica, who was jailed and tortured during the dictatorship in Chile. While enjoying the privilege of freely worshipping God in the United States, I will never relinquish my duty to stand up to tyranny.
The world needs to know that the Chinese Communist Party is a tyranny. I will stand up to tyranny every day until my people are free.

I hope and pray that people of good will in the United States and the rest of the world may open their eyes and see the true, tyrannical nature of the Chinese communist regime, and join in denouncing its violation and deprivation of basic freedoms to their people, among them the right to freedom of worship.